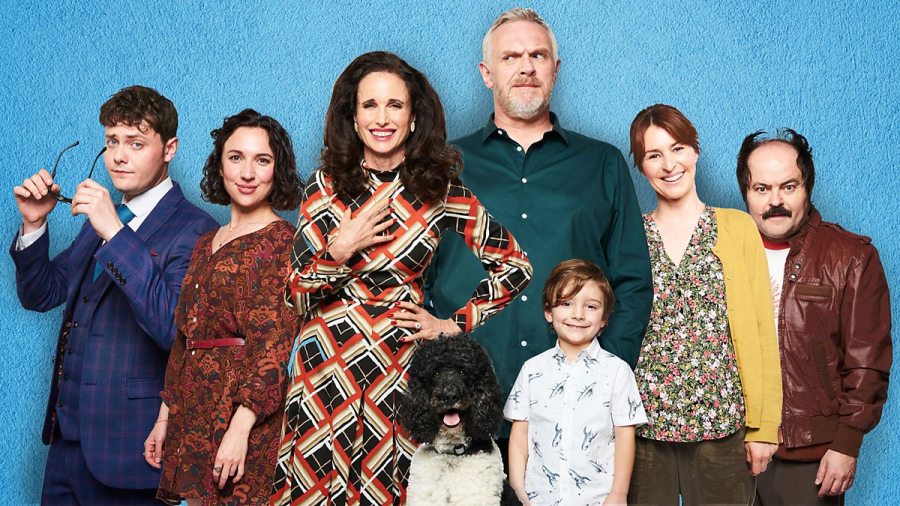 The fifth series of BBC comedy series Cuckoo absolutely confirms its status as the, so-called, “Doctor Who of comedy”.

This statement was made by Shane Allen, BBC Controller of Comedy Commissioning, when discussing the latest cast change of Kieron Quirke & Robin French’s BBC2 comedy series, as Twilight series co-star Taylor Lautner makes way for Andie MacDowell as the central American star alongside Greg Davies and Helen Baxendale in what has steadily evolved into one of the jewels in the BBC’s modern comedy crown. Lautner himself replaced Andy Samberg after one season, at which point the actor made his name on the popular and successful Brooklyn Nine-Nine.

By all rights, Cuckoo shouldn’t have survived his departure, and yet it endures.

Samberg, you see, played the titular ‘Cuckoo’, a hippy American who is brought home to the quaint West Midlands market town of Lichfield by Rachel, the daughter of Davies’ Ken and Baxendale’s Lorna, only to repeatedly cause chaos and exasperate the uptight, middle-aged Ken with his relentlessly lazy and upbeat nature. The first season was an amiable stroll through recognisable culture clash comedy tropes, but Samberg never quite gelled in the role with Davies, who at this point was himself emerging from his breakout role on Channel 4 hit success The Inbetweeners into one of the UK’s premier stand-up comedians.

When Samberg left the role, and Cuckoo himself was killed off off-screen, the show attempted something brave. Quirke and French, recognising the culture clash concept still worked, replaced Samberg with Lautner as Cuckoo’s long lost son Dale, a naive, child-like but good-hearted hunk, with a mysterious past battling Yakuza, who immediately begins to charm Rachel as he comes looking for traces of his father. The show also took the opportunity to recast Rachel at this point, bringing in Stourbridge-born Esther Smith, who instantly improved the character in her far more likeable portrayal.

Lautner quickly surprised everyone with just how much he threw himself into the role of Dale over three series, happy to lampoon his own intended career as a heart throb and incumbent Hollywood action star, given it never really took flight after starring roles such as Abduction critically (if not commercially) bombed. He displayed a real gift for comic timing and displayed a fantastic chemistry alongside Davies, becoming his stooge as Cuckoo steadily developed the cast into much more of an ensemble and morphed it into what it was really always all about: Ken. Davies became the lead even if Lautner was technically the ‘star’.

Cuckoo consequently over the next three series became funnier and more dexterous in the culture clash comedy it deployed, amping up the eccentricity in supporting characters such as Kenneth Collard’s breakout role as weird neighbour Steve Chance, while retaining a genuine heart behind the often naughty and rude laughs. Cuckoo never tips into sentimentality, always ready with an air-popping shock gag or sarcastic rejoinder when it edges too close to everyone getting along or Ken becoming too much of a success, but unlike many British comedies, you genuinely like a care about these characters from season to season. Well, maybe except son Dylan, who is knowingly amoral and a pretty awful human being.

What the show proved was that it was able to become a comedy ‘Taggart’. Taggart was a successful ITV police drama series across the 1980’s and 1990’s, starring Mark McManus as Scottish detective Jim Taggart. When McManus unexpectedly died in 1994, the series continued for well over ten years with Taggart’s co-stars in the main roles, yet the show was still called Taggart, retained the same style and kept to the same setting. It was a consistent ITV hit which managed to overcome the death of its lead actor. Cuckoo’s regeneration has done the same by outliving, outgrowing and exceeding the original lead character.

With the latest fifth season, commissioned alongside the fourth which aired in the middle of 2018, Cuckoo faces the regeneration challenge again with Lautner’s departure as Dale and the arrival of Ken’s long-lost sister, Ivy Middlefart, as played by MacDowell.

Quirke and French may have reconceptualised the series to be primarily a vehicle for Davies and mainly around Ken’s hapless schemes and problems, but they recognise Cuckoo only works if the culture clash aspect exists, and if the lives of the Thompson family are disrupted by the arrival of a brash American who complicates their lives. Cuckoo as a character was the layabout hippy boyfriend every father dreads their daughter bringing home. Dale started as an irritant and ended up akin to a loyal, adorable, uncontrollable pet. Series 5 needed a fresh way to maintain the central comedic dynamic at the heart of Cuckoo and with Ivy they shift the dynamic successfully by MacDowell playing, essentially, an amoral, at times sociopathic blend of Ivana and Melania Trump with a dash of Kim Cattrall’s Sex and the City character..

MacDowell is stunt casting in the same sense Lautner was. Nobody would have expected Jacob the werewolf from Twilight to appear in a quirky, redoubtably British comedy series, and it is equally bizarre seeing the middle aged but still elegant and statuesque MacDowell, still best known for her role opposite Hugh Grant in Four Weddings and a Funeral (not to mention the face of L’oreal for three decades), playing broad, Deep South accented comedy alongside Greg Davies. Yet it works. MacDowell chews up the part with relish, spitting plots and poison as the self-centered, fallen real estate heiress wife with glee. She, too, works surprisingly well alongside Davies.

It was extremely brave of Cuckoo to again try and weather the departure of the character who provides the main catalyst for the comedy. It displays a confidence by the stars and writers in the existing characters who work alongside said exotic star, justifiably. Davies could play Ken in his sleep because, in reality, he’s probably only a little bit removed from the actor himself. Baxendale’s Lorna is the heart of the show, in many ways; her comic rapport with Davies is marvellous and Cuckoo probably wouldn’t work if you removed her. As much as Smith is good in the role, Rachel has always been the weakest link, and given Ivy is not introduced through her as Cuckoo or Dale were, she becomes over this season increasingly surplus to requirements in many ways, despite the stirrings of a same-sex relationship with her ex-boyfriend’s girlfriend in the offing.

Cuckoo does often fall back on many of the same jokes, particularly this series sex videos and Davies getting his kit off, but the sheer charm of it always makes it work and makes it funny. It straddles the eccentric and bizarre more confidently than the Davies-written Channel 4 comedy series Man Down, which in some respects treads similar ground, but fails to have as solid a character foundation and family base from which to balance the outlandish jokes. While natural comic contrivances abound in a series where dogs heads accidentally get cooked, weed farms appear in stately homes, or even a weird woman in a pub depicts the future MacBeth-style, Cuckoo is charming and grounded enough to be somehow believable at the same time.

MacDowell looks poised to reappear as the breath of fresh air that is Ivy and given the series ends on a cliffhanger, there looks like every indication Cuckoo may be recommissioned for more series. It deserves to. For a show five series and seven years in, it remains remarkably fresh, relaxed, confident and, most importantly of all, funny. Often in spades.

Much like the Doctor, Cuckoo may well outlive us all.